Melancholy, sadness, lack of concentration, tiredness or loss of appetite are some of the symptoms shown by children with autumnal asthenia. A transitory state that causes an alteration in the child’s biological rhythm is characterized by loss of energy, apathy, and the free fall of the body’s defences due to the change of season.

As Dr. Fernando Baixauli, a pediatrician at the Vithas Valencia 9 de Octubre, Vithas Valencia Consuelo and Vithas Castellón hospitals, explains, “autumn implies fewer hours of light, lower temperatures and a frenetic pace of school and extracurricular activities.” “Seasonal changes,” emphasizes the professional, “cause an alteration in the levels of certain hormones, specifically melatonin, a hormone related to sleep that has been associated with seasonal affective disorder. This hormone, which is also related to depression, is produced at higher levels in the dark. Thus, when the days are shorter and darker, more melatonin is produced. In addition, there is a decrease in beta-endorphin, and its deficiency causes irritability, nervousness, sadness, tiredness and apathy”.

In general, the symptoms of autumnal asthenia last between a week and a fortnight, more or less as long as it takes for the body to adapt to the new season. According to the specialist, “if the clear symptoms of asthenia last for more than fifteen days or if the child also associates mucus, earache, low-grade fever (37.5-37.8 ºC), weight loss or diarrhea, it will no longer be treated asthenia. If these symptoms are added, – he adds – the child should be taken to the pediatrician since it may be the beginning of an illness such as a cold, gastroenteritis, otitis or even an allergy ».
How to prevent and treat autumnal asthenia in children

The predisposition of some children to suffer from autumnal asthenia is obvious, but their lifestyle is a determining factor in preventing it. «To combat this state of mind, it is important to respect sleep schedules, do physical exercise and lead a healthy life in general. The little ones need an established routine for their physical and psychological development to be adequate “, says Dr. Baixauli, who recommends” doing physical exercise outdoors, since it stimulates the release of dopamine and endorphins that lift the spirits of the little ones.”

On the other hand, a balanced diet and a healthy diet are fundamental pillars to prevent asthenia. Food in these cases plays a fundamental role, being advisable to include proteins of high biological value in the daily diet in addition to vitamins of group B. In this sense, it is advisable to consume products rich in vitamin B3 (niacin) and B12 and essential amino acids such as tryptophan, which improves serotonin levels. “The adequate supply of nutrients and vitamins is essential for the child to have adequate physical and mental health without forgetting good hydration,” concludes the professional.

The doctor assures that children should sleep between 9 and 10 hours until they are 18 years old regarding adequate rest. “In fact,” he adds, “it has been shown that levels of cortisol, which is the stress hormone, are greatly reduced after a good rest and, on the contrary, when you sleep less than you should, they increase.” This hormone is also related to being overweight since the lack of rest increases the appetite level increasing our need for glucose.

Autumn arrives, and with it a change of season in which there are fewer hours of sunshine, temperatures drop, rain arrives, the return to routine, and the stress of work. With all these changes, it is normal that a strange and annoying feeling of decay can appear, and what is known as autumnal asthenia is suffered.

And it is that after months of heat and a lot of sunlight, autumn comes with a decrease in the hours of light to which our body is exposed, which causes alterations in the biorhythm and in the mood, which can lead to symptoms such as apathy, listlessness, drowsiness, and difficulty concentrating.

These characteristic symptoms of autumnal asthenia usually appear due to a poor adaptation of the organism to the change of season and, in general, do not last more than a few days or weeks. It is normal to adapt to autumn without problems since the change of season in Spain is done gradually.

However, as the body’s response to seasonal changes, what is more, common is that there are alterations in the wake-sleep cycle, which can negatively affect mood.

Why does fall get us down

Although it is usually associated more with spring, asthenia appears in the fall because the hours of sunshine are reduced, and vital rhythms change, producing an internal imbalance. But if someone were to blame, the main culprit for asthenia would be melatonin, a hormone responsible for regulating factors such as sleep or body temperature.
The peculiarity of melatonin is that its production increases when there is less exposure to sunlight. This increase causes a decrease in serotonin, better known as the hormone of happiness—this imbalance results in the appearance of direct symptoms of autumnal asthenia, such as tiredness and sadness.

These symptoms of asthenia, both physical and mental, include, in addition to those already mentioned, others such as generalized weakness, low mood, difficulty concentrating, irritability and a lack of appetite and decreased libido may even appear.

With all this, it is not surprising that there is a decrease in the body’s defences, being more prone to infections, something never recommended and less in this time of Covid-19, where any suspicious symptom can generate the alarm.

What you need to know to combat autumnal asthenia

The best remedy is always prevention and, in this case, in order not to have to suffer from autumnal asthenia, the ideal treatment is to follow a varied and balanced diet, where there is no shortage of seasonal foods such as cauliflower, pomegranate, quince, pumpkin, and those that are rich in tryptophan: an element that helps raise serotonin levels.

It is also recommended to progressively regulate the hours and activities until they are adapted to the work or academic days, and thus establish a regular meal schedule and fixed times for going to bed and getting up.

Performing physical exercise on a daily and moderate basis and taking advantage of the hours of natural light to sunbathe little favours the activation of neurotransmitters and the secretion of endorphins, which will make the mood much better.

If the decay requires some extra help, you can resort to vitamin and amino acid supplements or revitalizers such as ginseng and royal jelly, which pharmacies currently obtain. 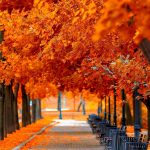